New applications of droplet microfluidics: from biomimetics to tissue engineering 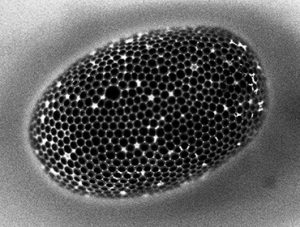 The project’s goal is to develop new microfluidic methods of precise, reproducible formulation of three-dimensional structures from aqueous micro-droplets as building blocks and to demonstrate the use of such structures in micro-tissue engineering and synthesis of biomimetic capsules.

During the last decade, droplet microfluidics has emerged as a powerful tool in high-throughput diagnostic and screening applications based on the fragmentation of a sample into monodisperse micro-droplets and subsequent manipulation as isolated bioreactors. The available manipulation techniques include splitting, merging, transporting, or trapping. However, the microfluidic formation of 3D structures from droplets, offering great potential in tissue engineering and drug delivery, is still poorly understood. In the program, we will demonstrate new applications of the microfluidic-assisted formulation of droplet-based materials in i) generation of multi-compartment liposomes, i.e., capsules built of several aqueous compartments separated by lipid bilayers, with the specific 3D arrangement of segments for advanced drug delivery applications, and ii) assembling of cell-laden droplets into 3D structures and culturing novel micro-tissues with unusual morphologies as a platform for high-throughput drug testing. On the side of basic soft-matter science, we will also, for the first time, iii) generate and manipulate structures built of tightly packed hundreds and thousands of droplets as an easily accessible model system for studying mechanics of soft granular aggregates such as cell spheroids. 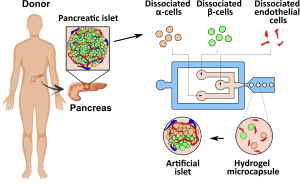 Type 1 diabetes is a devastating chronic disease rapidly becoming a 21st-century epidemic. It is characterized by the body’s inability to produce insulin, a hormone responsible for regulating the blood’s glucose level. Despite overall treatment progress, the cause of type 1 diabetes is not known, and it is not preventable under current knowledge. One of the most promising treatment methods, still experimental, is the transplantation of the so-called islets of Langerhans, tiny organs (less than 0.5 mm in size) located in the pancreas and responsible for the production of insulin. Unfortunately, currently applied transplantation procedures are harmful to the islets, requiring multiple donors and making the treatment ineffective. In response to the increasing demand on the pancreatic islets, tissue-engineers aim to create artificial islets de novo from individual pancreatic endocrine cells (cells regulating hormone levels in the pancreas) it stems cells or derived from animal tissue. In the project, we will explore one of the particularly appealing strategies relying on micro-encapsulation to generate implantable insulin-producing islet-like micro-organs. We will encapsulate the insulin-producing cells inside so-called ‘microbeads’, tiny particles made of hydrogel, a soft and bio-friendly material resembling gelatin, additionally enriched with proteins and nutrients for enhanced survival of the cells. It is well known that pancreatic cells prefer to be suspended in a soft but elastic matrix, an environment possibly resembling the native pancreatic tissue. We will formulate hydrogel microbeads optimally supporting cell growth, aggregation, and maturation to achieve fully-functional artificial islets in the project.

The project joins the increasing worldwide efforts towards developing new strategies for the treatment of type 1 diabetes. It is noteworthy that islet transplantation is likely to be soon approved for clinical application by Federal Drug Administration in the USA (currently in phase 3 clinical trial). We believe that the proposed project is very timely. Finally, the new formulation strategies developed in the project will also have a widespread impact on microfluidics, tissue engineering, and organ-on-chip technologies.

Printing of self-assembling droplet arrays: from basic physics to applications in cell encapsulation and high-throughput screening 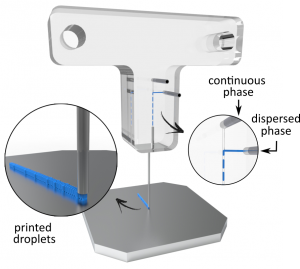 combinations of drugs often need to be custom-tailored to increase efficiency and minimize harmful side-effects in a given patient. Such personalized treatments call for personalized drug screening technologies operating on cells taken directly from the patient. Efficient testing of hundreds of drug combinations on small tissue samples (< 1 mL) is challenging and requires the development of new miniaturized technologies for biological sample processing. Droplet microfluidics offers high-throughput drug screening tools via dispersing the liquid sample into thousands of nanoliter sub-samples and manipulating them individually via subjecting each individually to a mixture of drugs at different concentrations, incubating and finally measuring cell response. One of the bottlenecks of this emerging lab-on-chip technology is the so-called ‘barcoding’ of individual droplets, which is unique labeling allowing association of the observed cell response with the drug combination contained in the encapsulating droplet. Currently, existing droplet labeling methods based on the injection of dyes at various predesigned concentrations suffer from the relatively low resolution, limiting screens’ capacity to around a hundred droplets. In contrast, the actual applications typically involve thousands or tens of thousands of droplets.

In the project, we will develop a droplet-labeling technique based on their sequential deposition at a substrate. In particular, we will exploit the effect of the spontaneous formation of ordered droplet patterns along a printing path. Such patterns emerge due to random droplet rearrangements occurring under specific printing conditions. As a result, each droplet is labeled by a unique neighboring pattern. In the project, we will develop a basic understanding of droplet rearrangements’ phenomena during printing and study the generated patterns’ labeling capacity. We will also perform proof-of-concept experiments involving the encapsulation of living cancer cells inside the printed droplets to screen their response to a varying drug concentration.

The technology developed in the project will provide a non-invasive (dye-free) and cost-effective alternative to existing droplet barcoding methods, potentially transformative for the fields such as drug development, personalized medicine, or point-of-care diagnostics.